I found rhubarb at Whole Foods yesterday and was s

How we end a week- steak frites and a (very) dirty

One of my favorite parts of summer is the beautifu

Our go-to easy dinner is always an Asian inspired

The best day spent picnicking with my love 💕 No

It’s Friday so that means pizza night (and polis

Taking advantage of working from home to make lunc

After the endless pasta, pizza, and gelato from Europe, I never thought I’d say this, but I needed a break from white flour and white sugar. I’m an all or nothing kind of gal, so for my first breakfast I made back in the States I knew it had to be vegan.

During my trip I didn’t go to a grocery store once, crazy I know, so when I got home I sped to Whole Foods as fast as I could. As soon as I walked in the glorious paradise some call a grocery store, I was greeted by a display of crimson rhubarb. I took this as a sign from the Gods, and grabbed a bunch for a compote.

Oatmeal seemed like an addition that was healthy yet hearty enough to not send my body into shock after so many carbs. Dramatic?? Who me?! So, I took some inspiration from one of my fav bloggers, Ashley, from Not Without Salt.

She makes insanely good toasted oats with coconut, so I took a cue from her recipe and made it my own. Shall we? 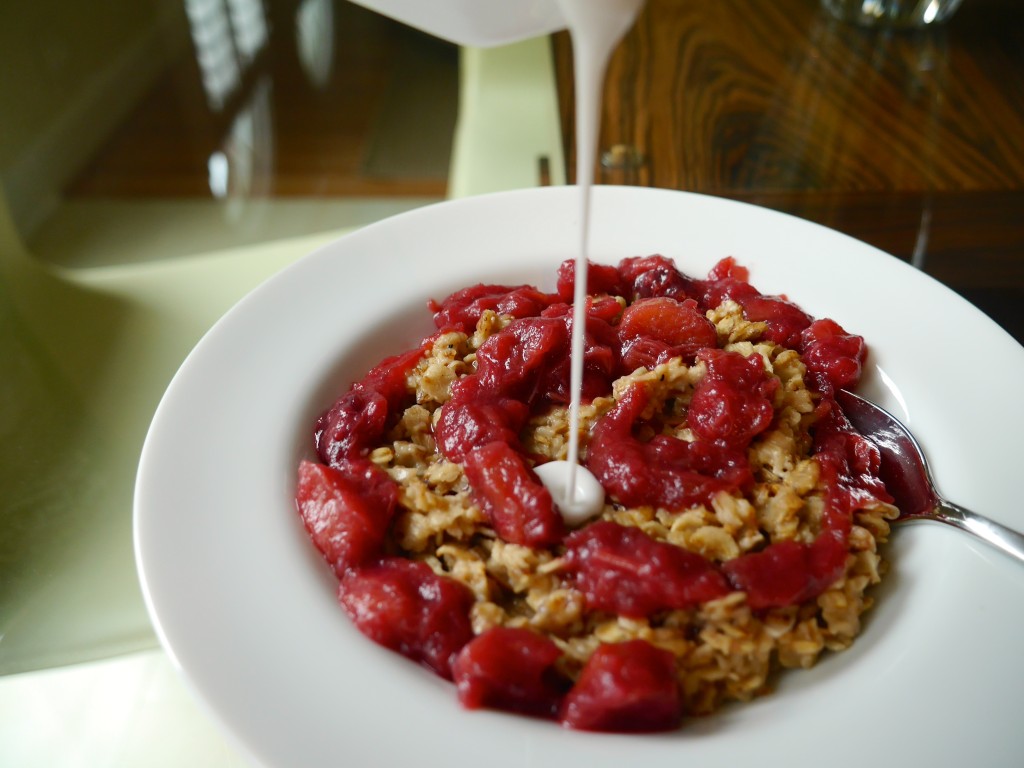 First, a look at what we’ll be making. Creamy oats with a tangy compote, all drizzled with cool coconut cream! Ah ok, start out by chopping up your rhubarb into little pieces. 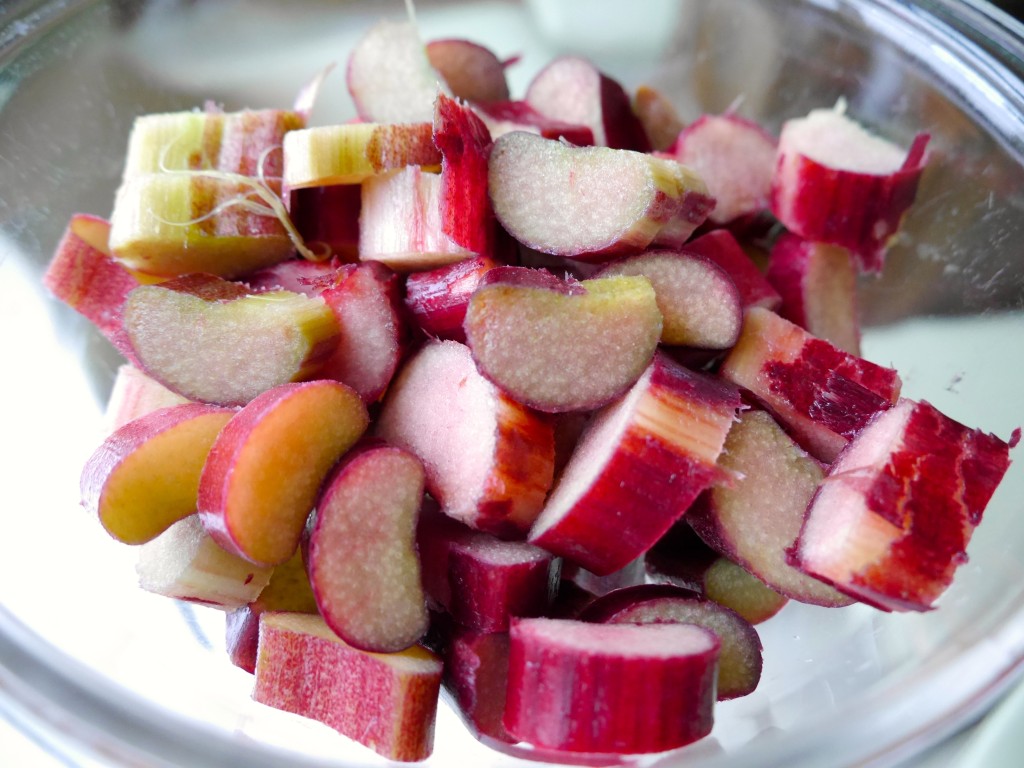 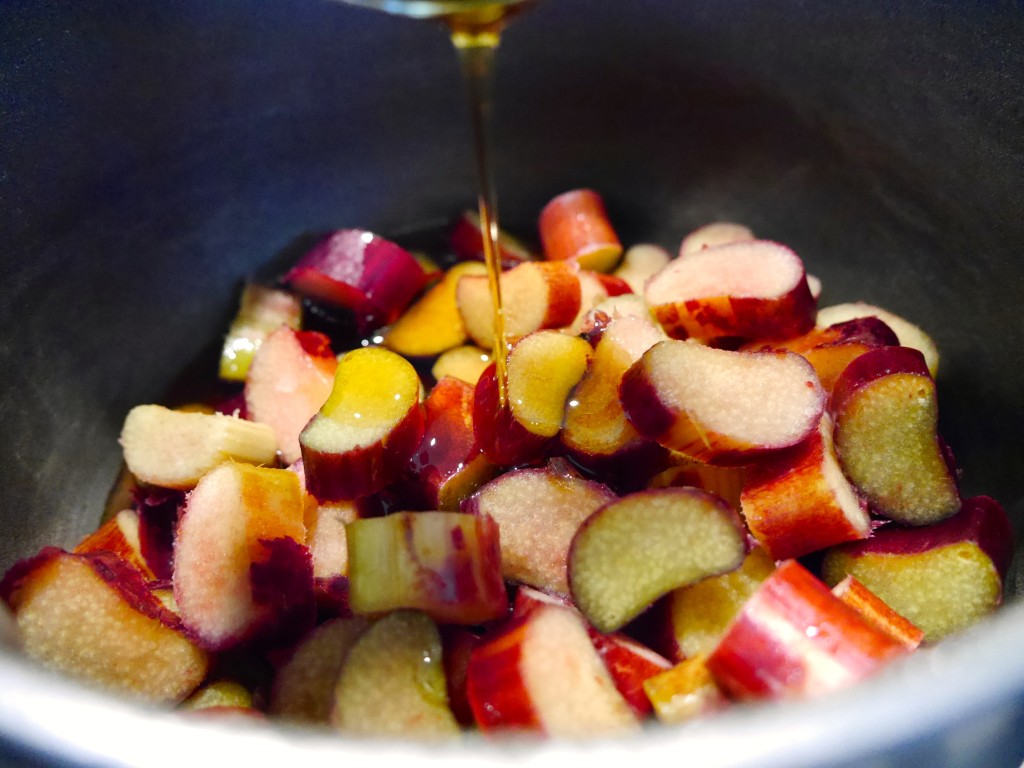 In a pan over medium high heat, combine rhubarb and a glug of maple syrup. 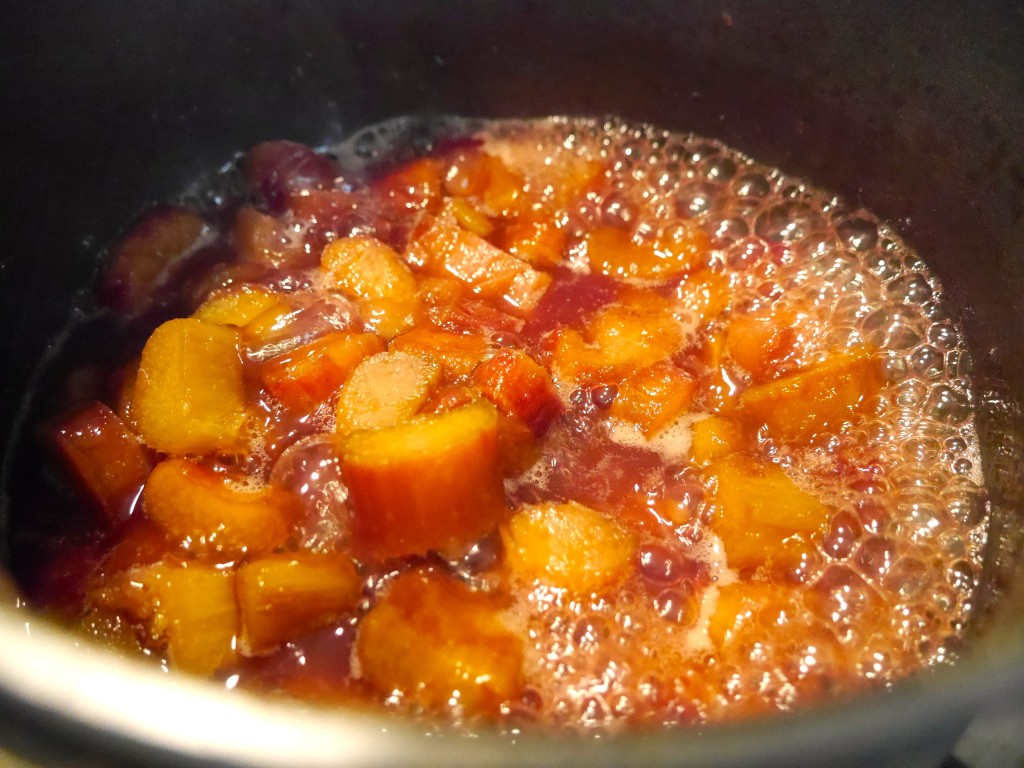 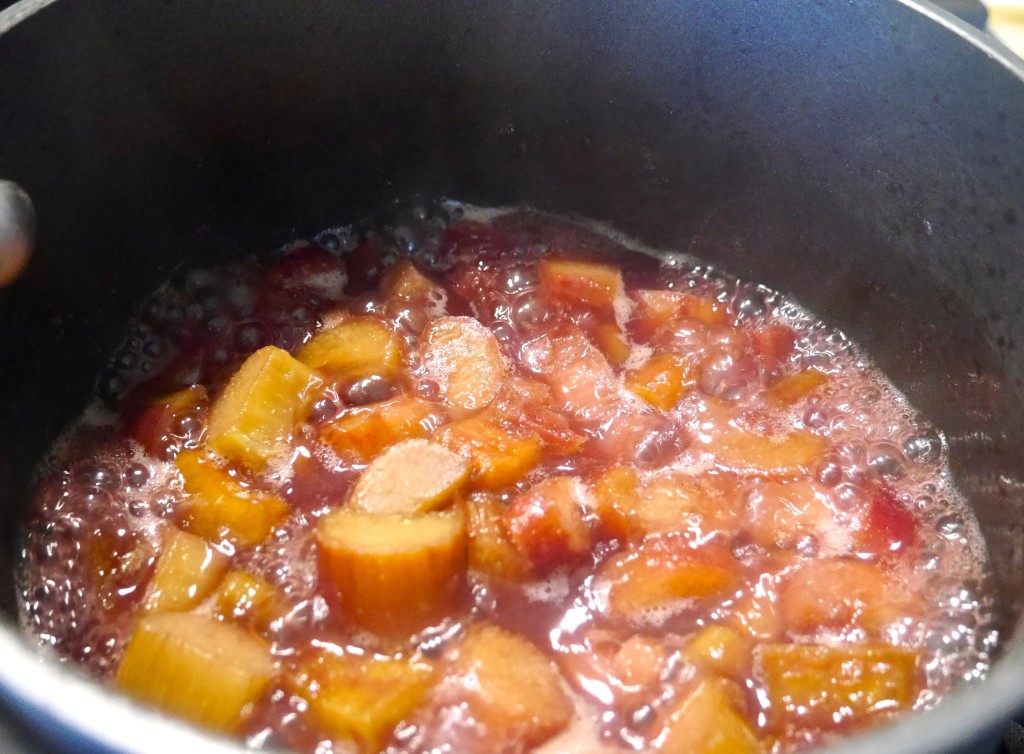 Pop on the lid, and let bubble away until rhubarb is super tender and the sauce is reduced.

Note: my rhubarb wasn’t as red as I liked, so I threw in a few dark cherries just for color! 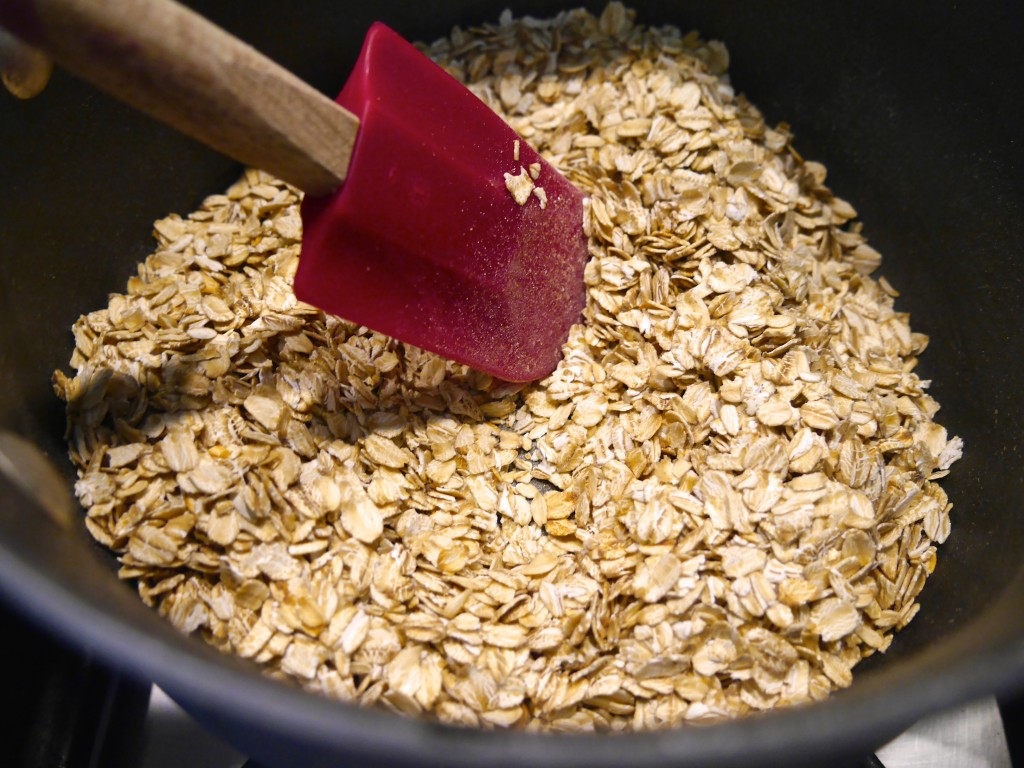 Now on to the oats! In a pan over medium-high heat, toast your oats until golden and nutty smelling (ha! so mature, I know). 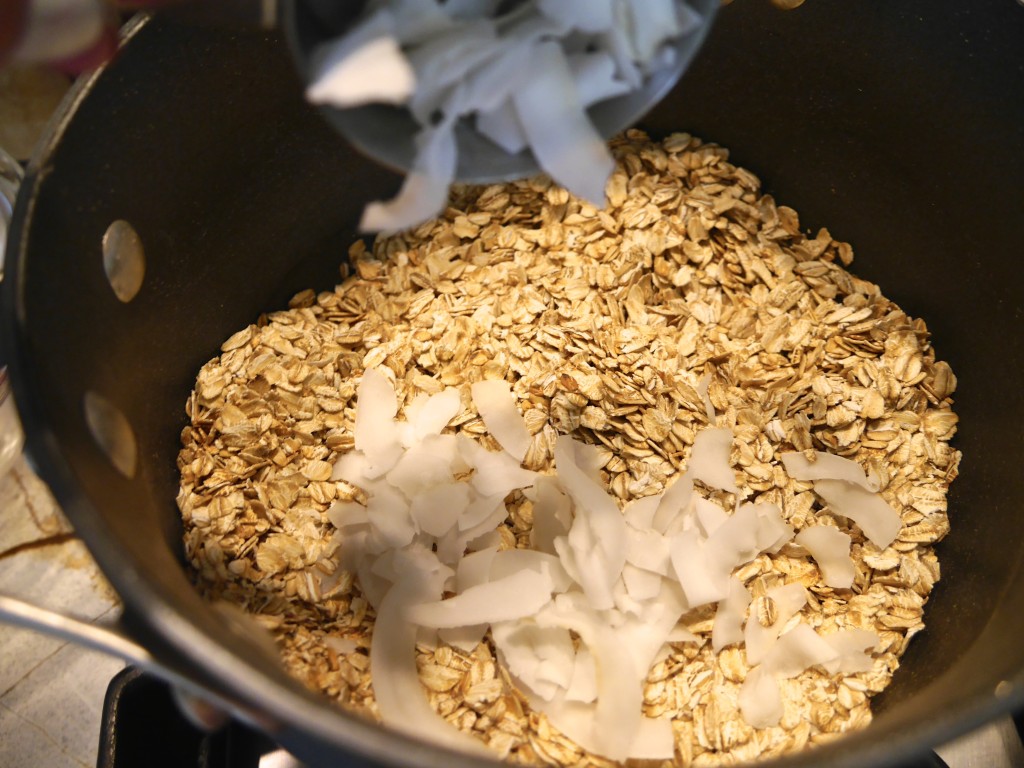 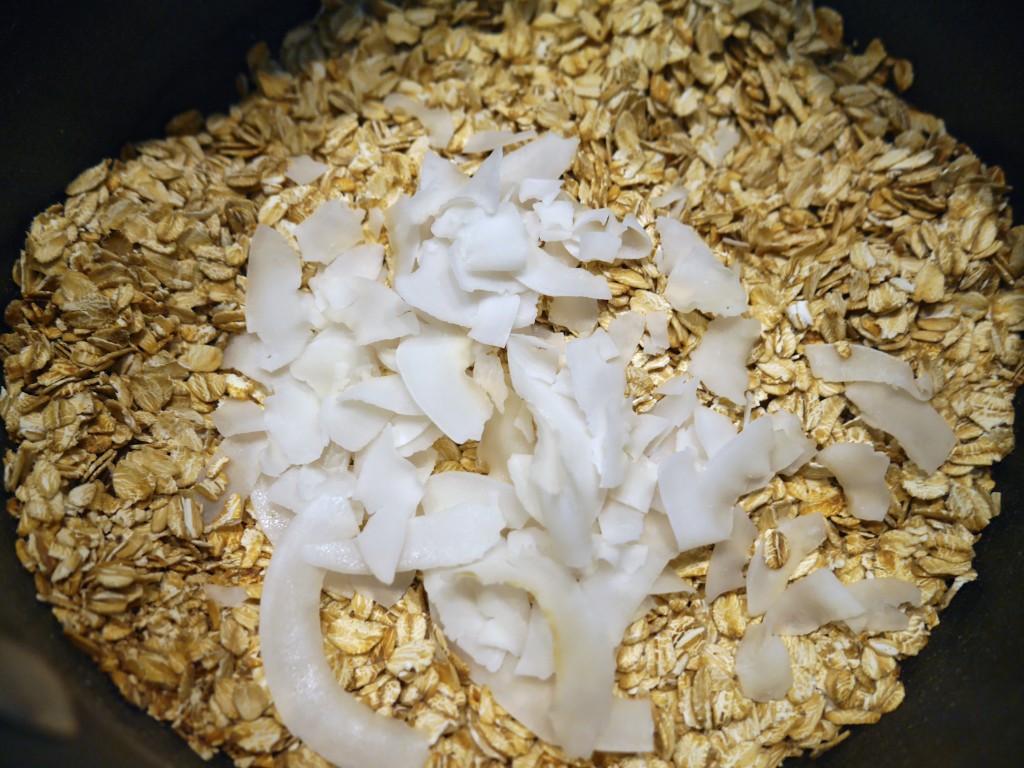 Add in your coconut flakes and toast for another minute. 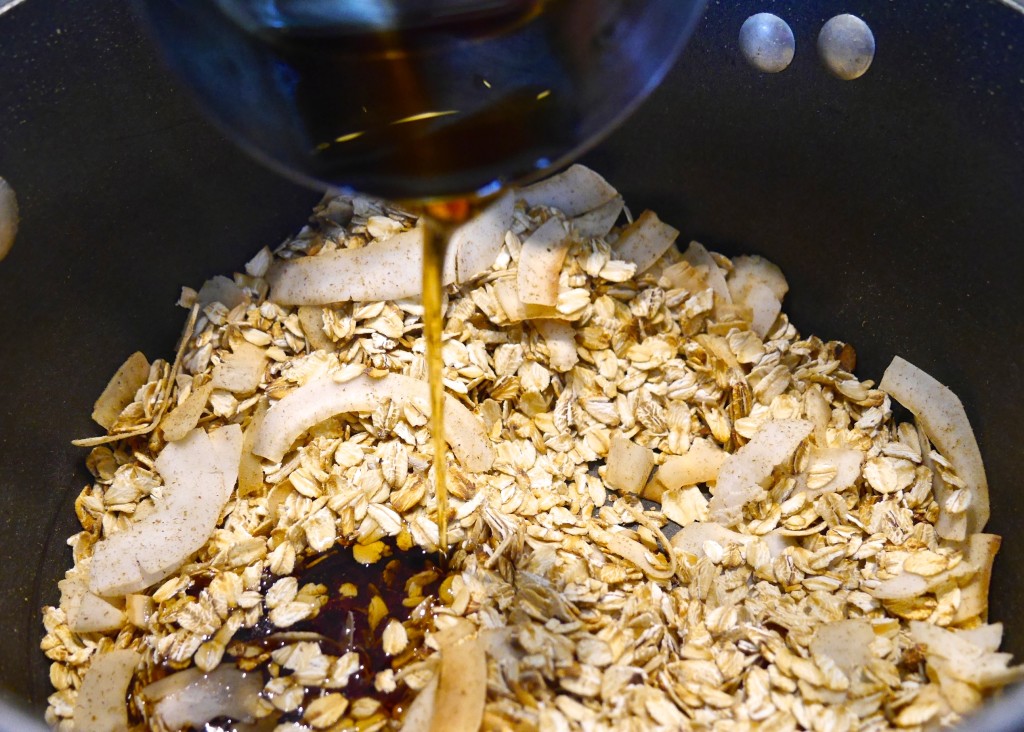 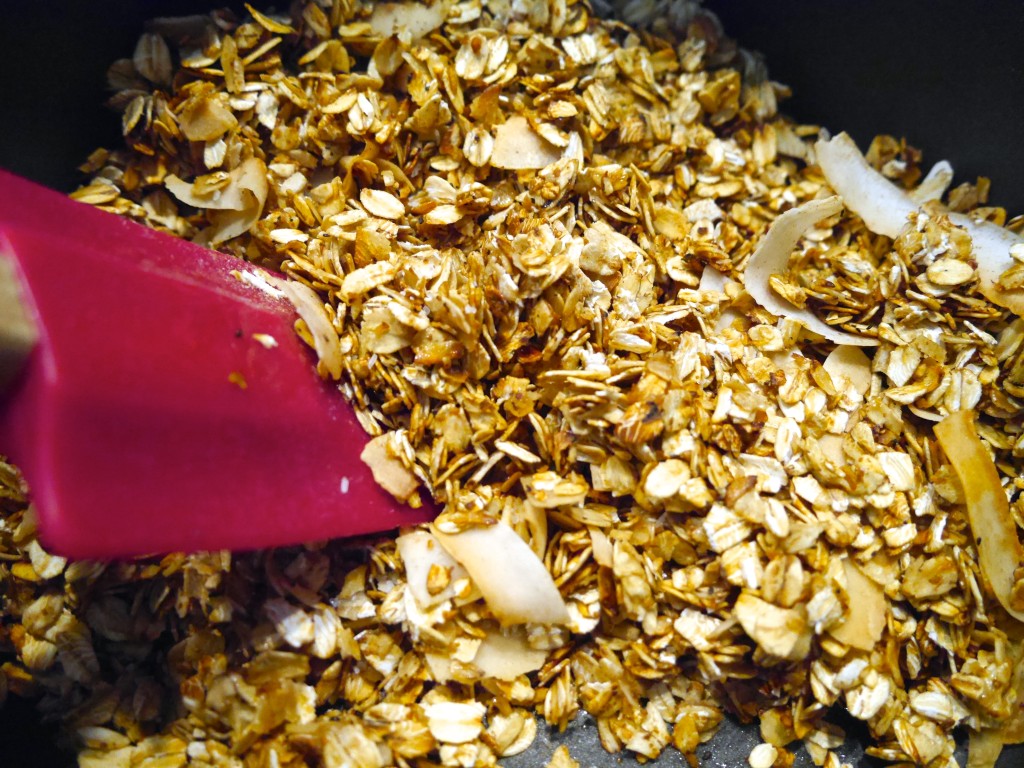 Add in a little maple syrup, vanilla extract, and salt, and stir until the oats are coated. 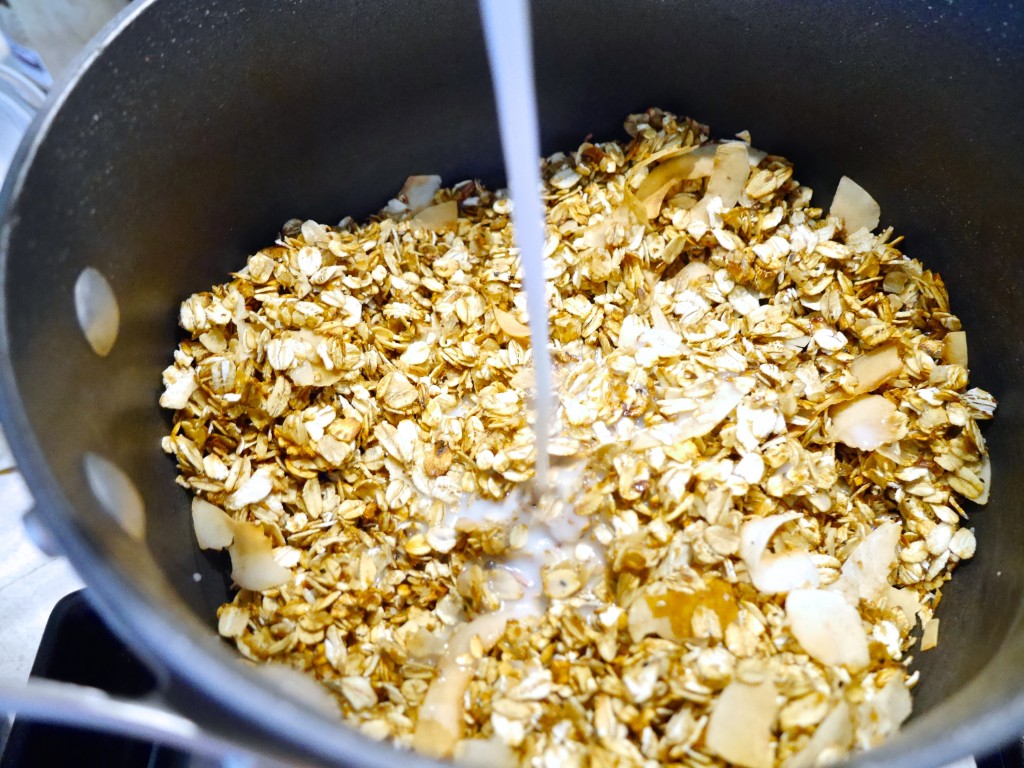 Now, here’s the part that makes these oats different than the rest! You’re going to slowly drizzle in coconut milk as you stir the oats.

You want to add a little more milk just when the oats have soaked up the last bit you put in, that way the oats will be super creamy. This is how you make risotto as well! 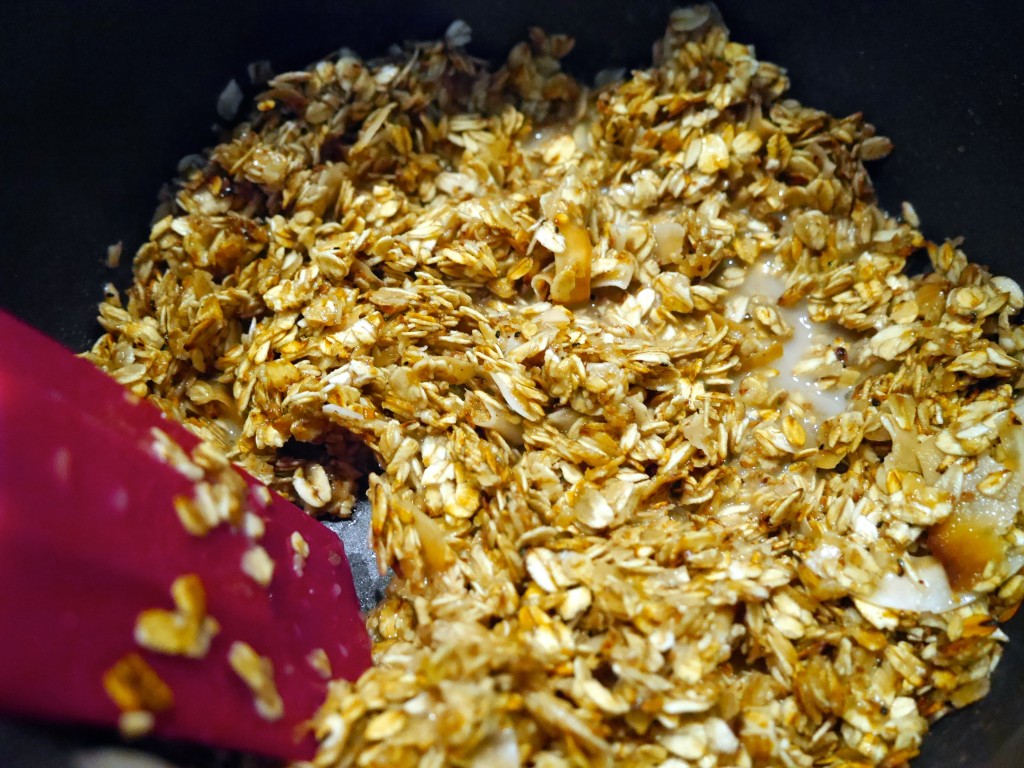 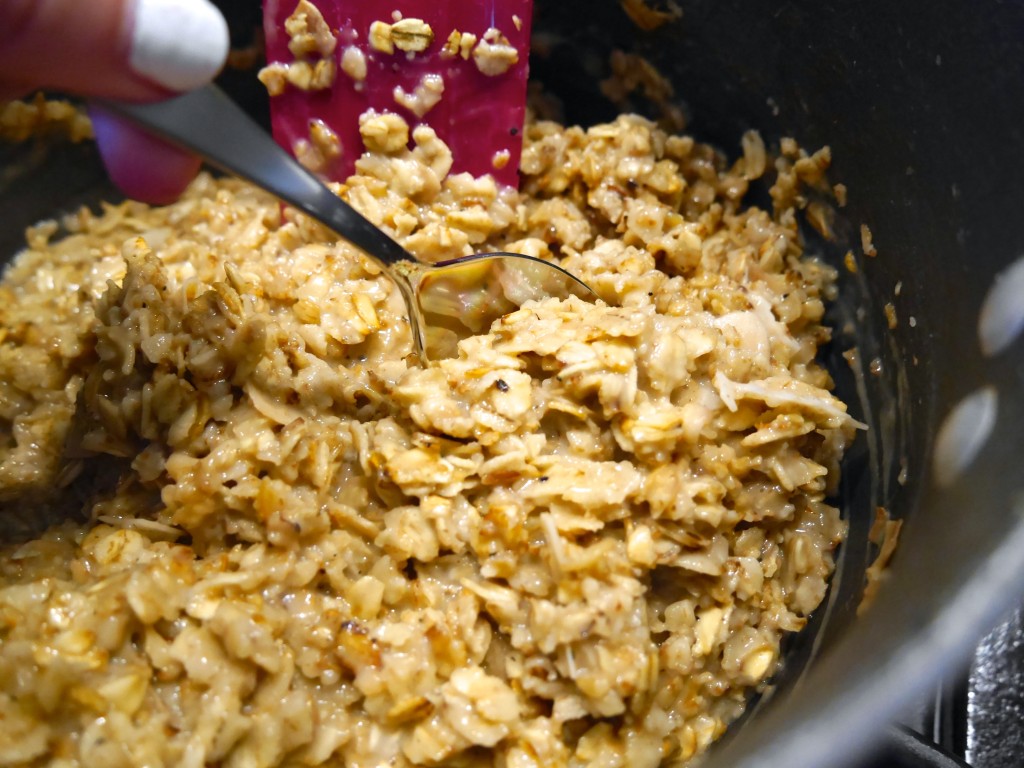 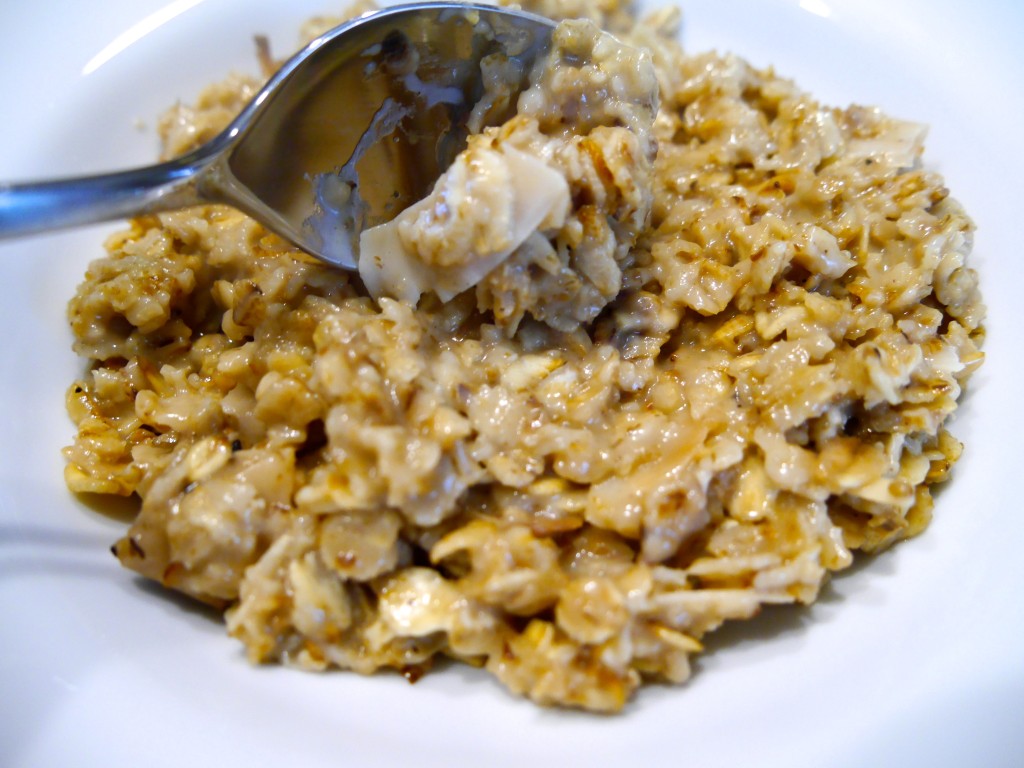 Once the oats have absorbed all the liquid, spoon them into a bowl. 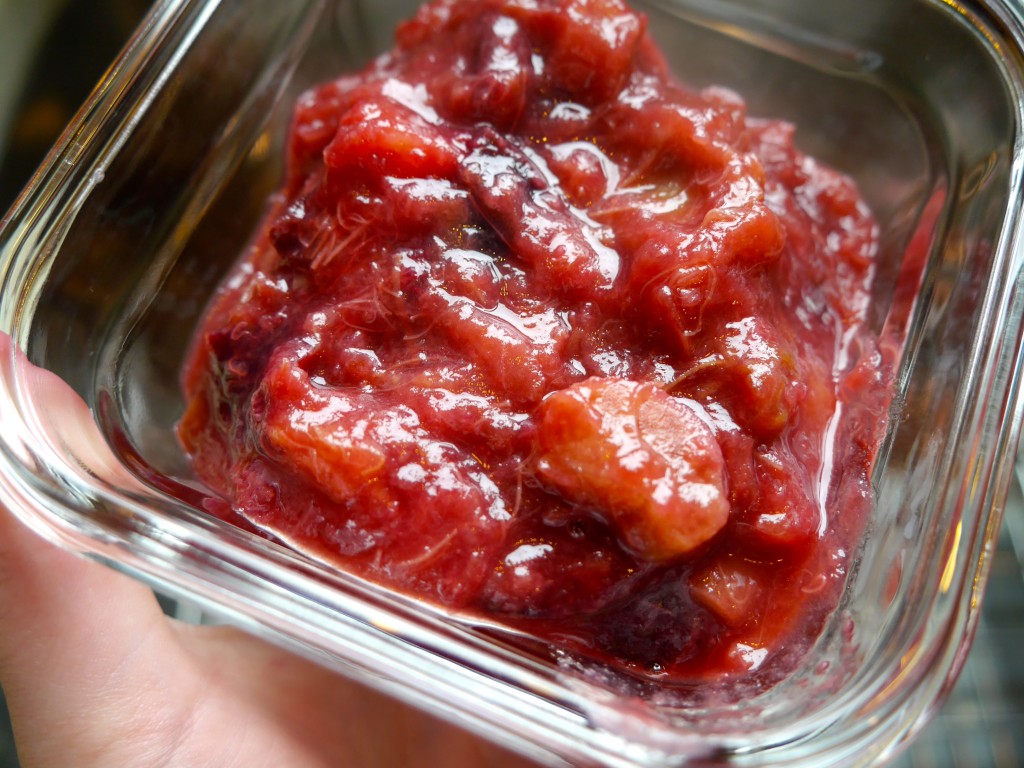 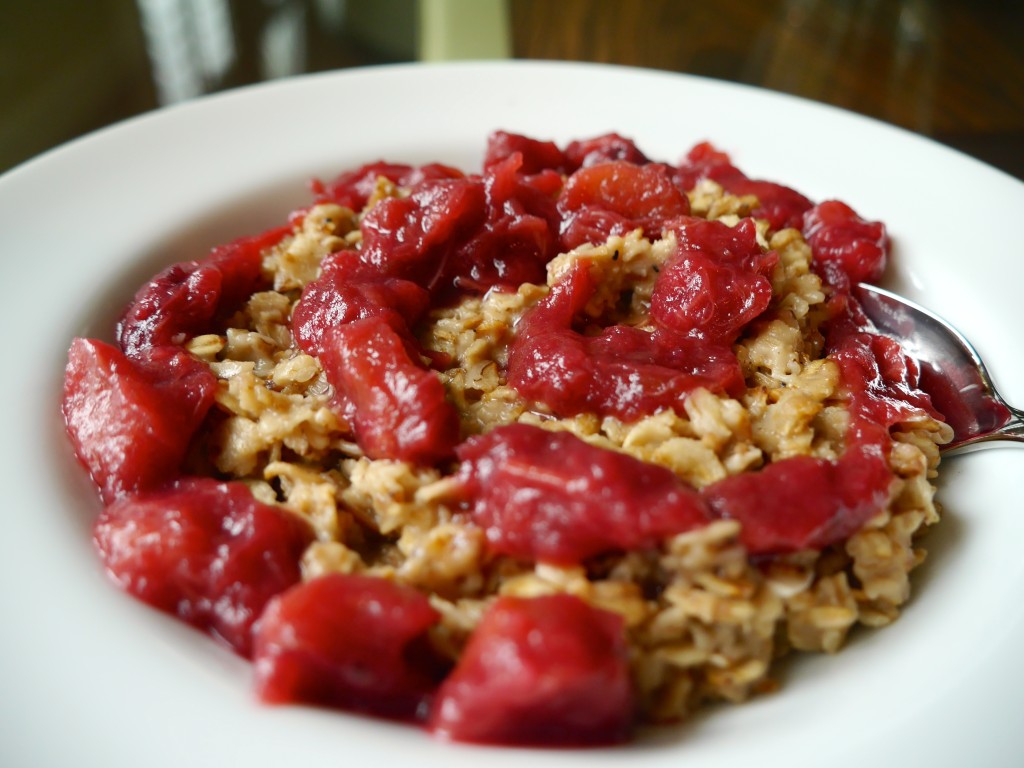 Top with your gorgeous compote (I got really into the swirl idea) and crack open a can of full fat coconut milk. 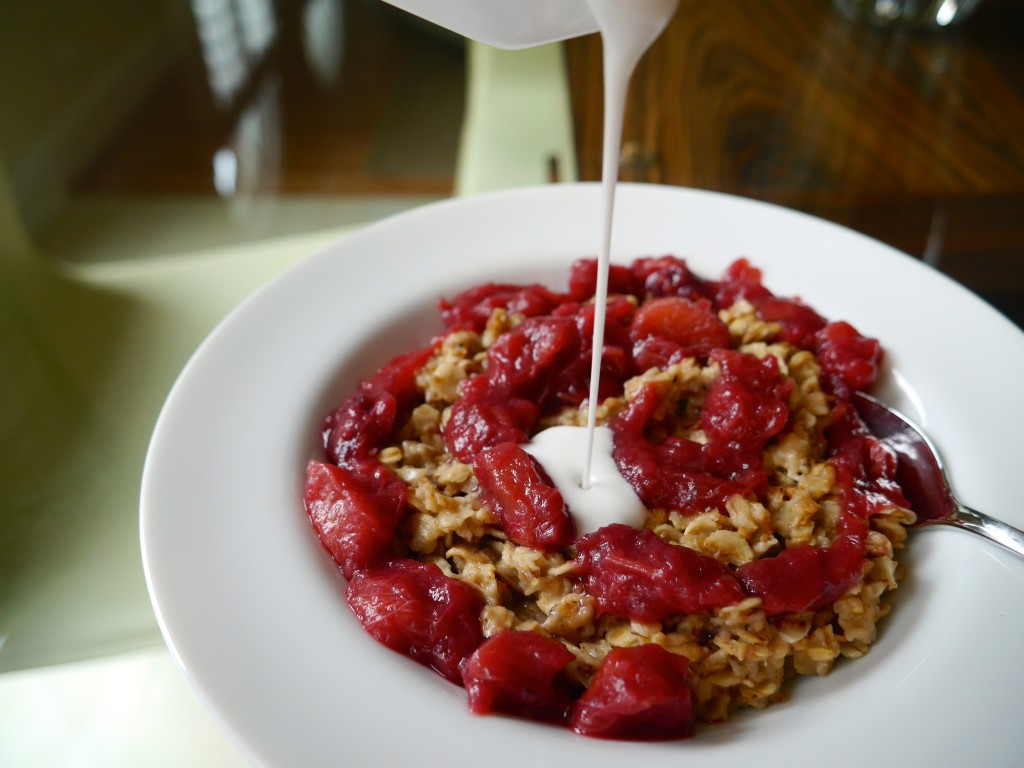 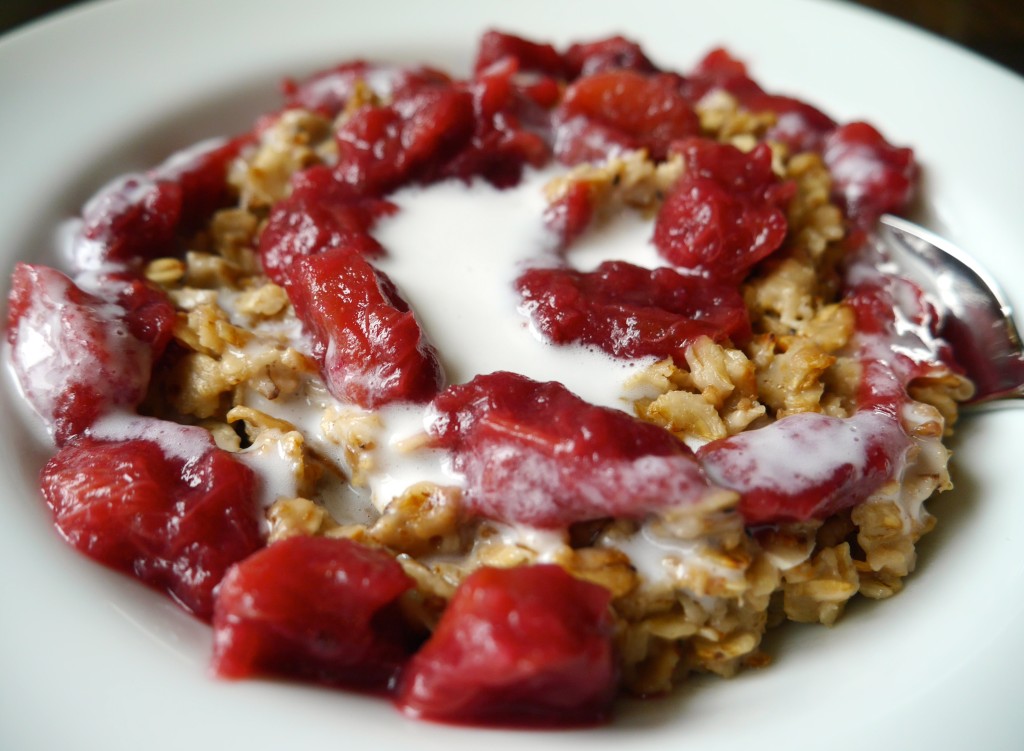 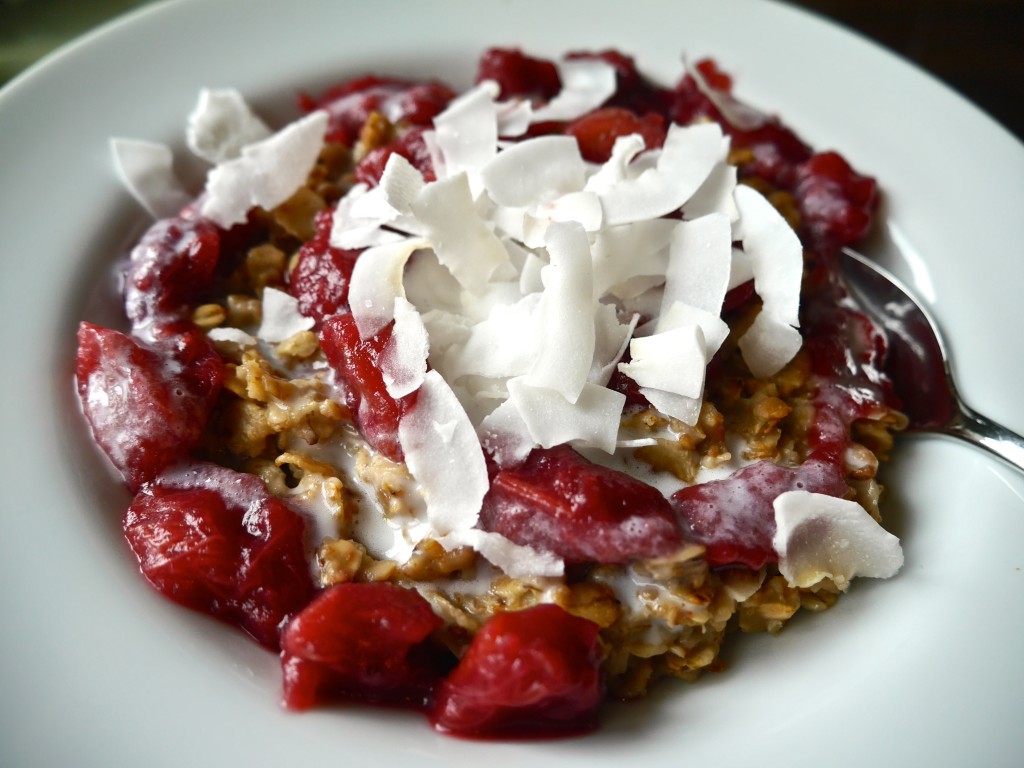 Drizzle that on top, sprinkle with a little more coconut, and dig it! 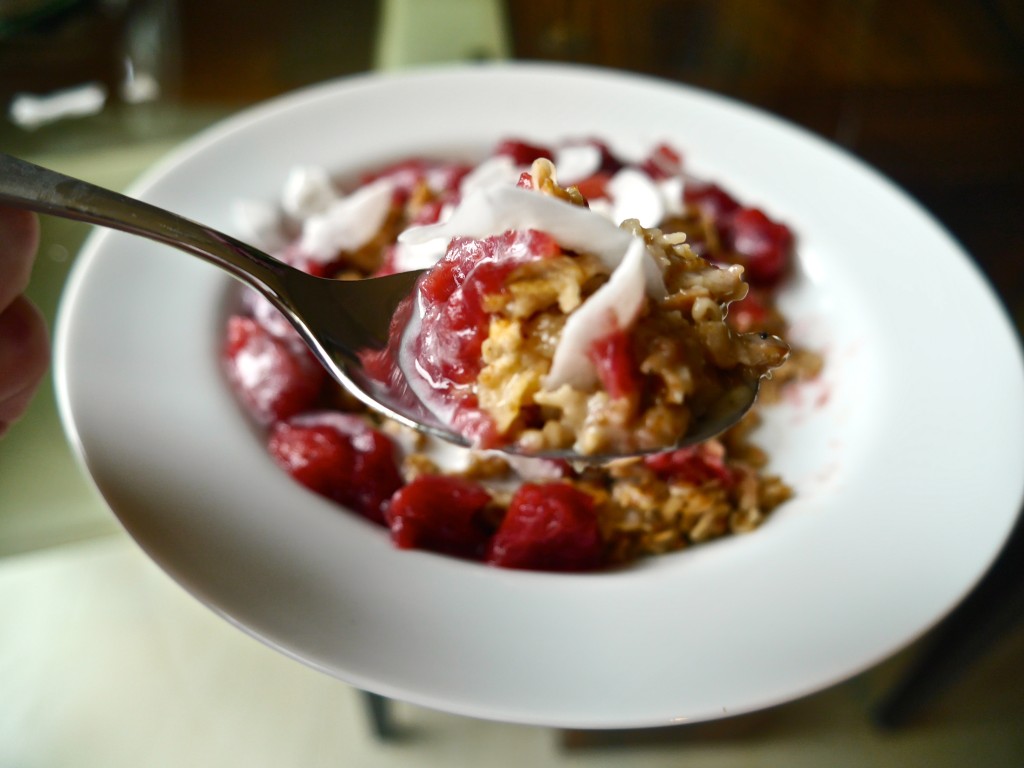 This breakfast is incredibly decadent, yet is completely vegan, full of fiber, has tons of fruit, and healthy fats! If this seems like too much to do on a busy morning, just make a big batch of the oats when you have a minute, and keep ’em in the fridge for the rest of the week!

They heat up beautifully, and are a perfect way to start the day. Also, I encourage you to try the compote on other dishes like pancakes, ice cream, even on grilled meat with a little rosemary mixed in!

Note: there are three kinds of coconut milk at the grocery store:

Rhubarb Compote (makes about a cup)

Toasted Coconut Oatmeal (serves 4) recipe adapted from Not Without Salt