Skip to content
What is spooky season you ask? Not getting a piece

It’s been awhile since our living room looked li

This Avogolemono, Greek lemon chicken soup, is my

Saltie Girl lived up to the hype, especially their

Fresh mani for our trip to Boston! I can’t wait

I have the fullest heart from a weekend packed wit

A few days ago, Zack and I arrived in beautiful Miami! With 85 degree temperatures, warm ocean water, and massive palm trees, I guess you can say I’m not missing D.C. at all!

We’re staying at the W, a modern hotel that’s right on the beach and just a short drive from all the best restaurants South Beach has to offer. 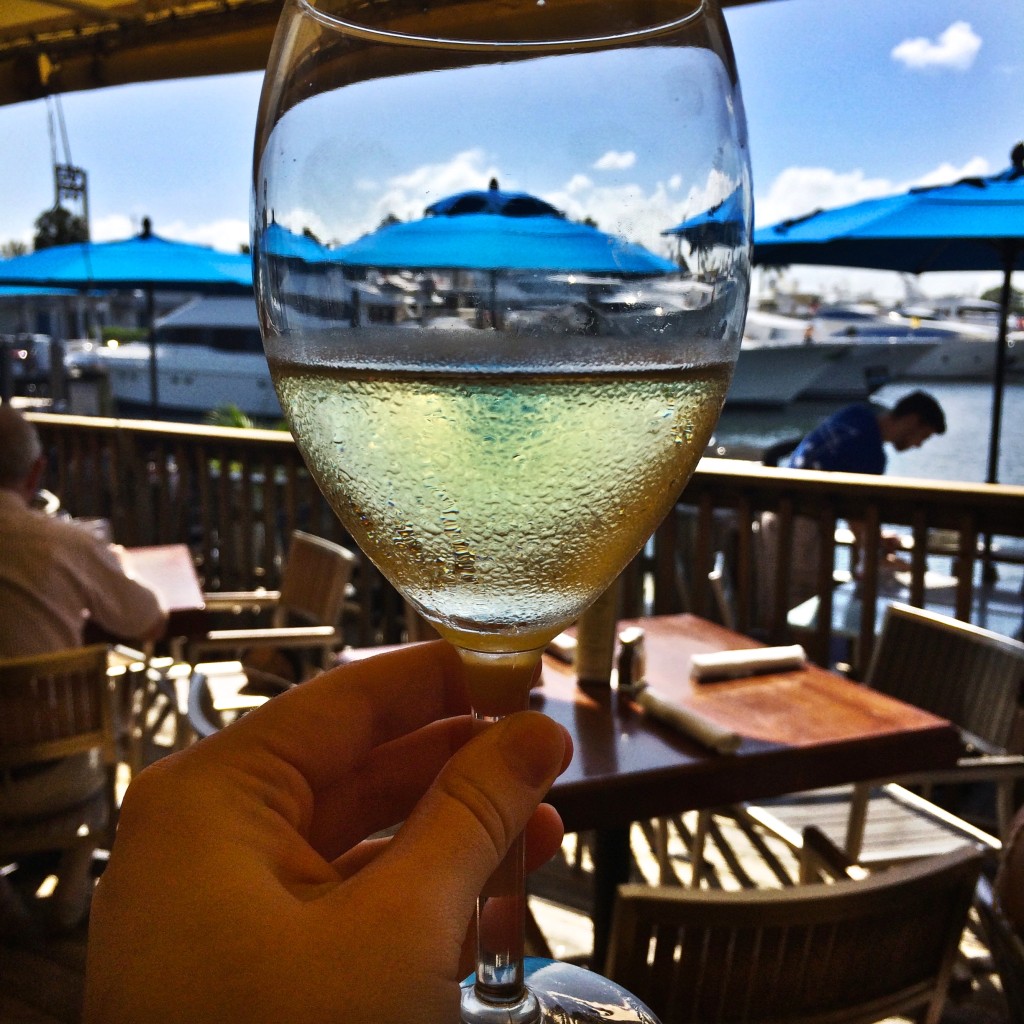 After a long morning at the beach, we walked to a nearby seafood bar for a crisp glass of wine and a dozen briny oysters. They views of the yachts in the background weren’t too awful either 😉 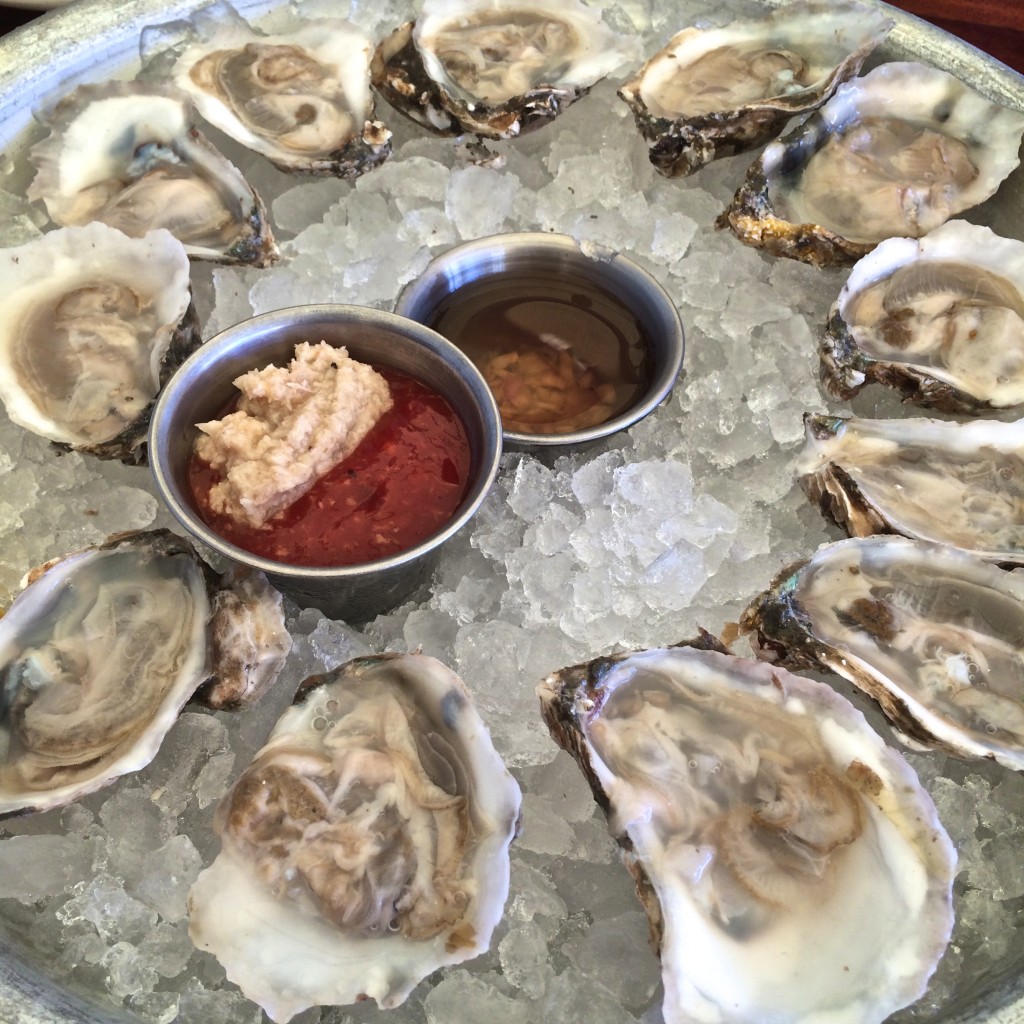 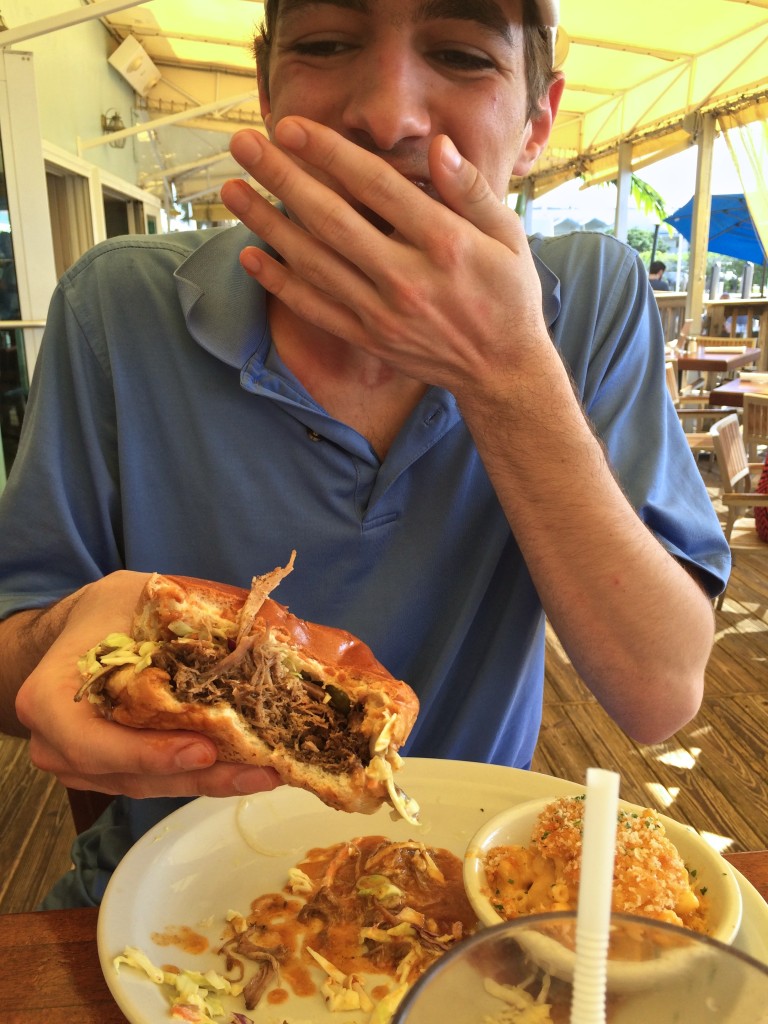 Naturally my family enjoys eating just as much as I do, so after lunch our first thought was “Where are we going for dinner??” The last time we were here we went to a spectacular Pan Latin/Spanish/Caribbean restaurant called Ola, and decided to give it another go. 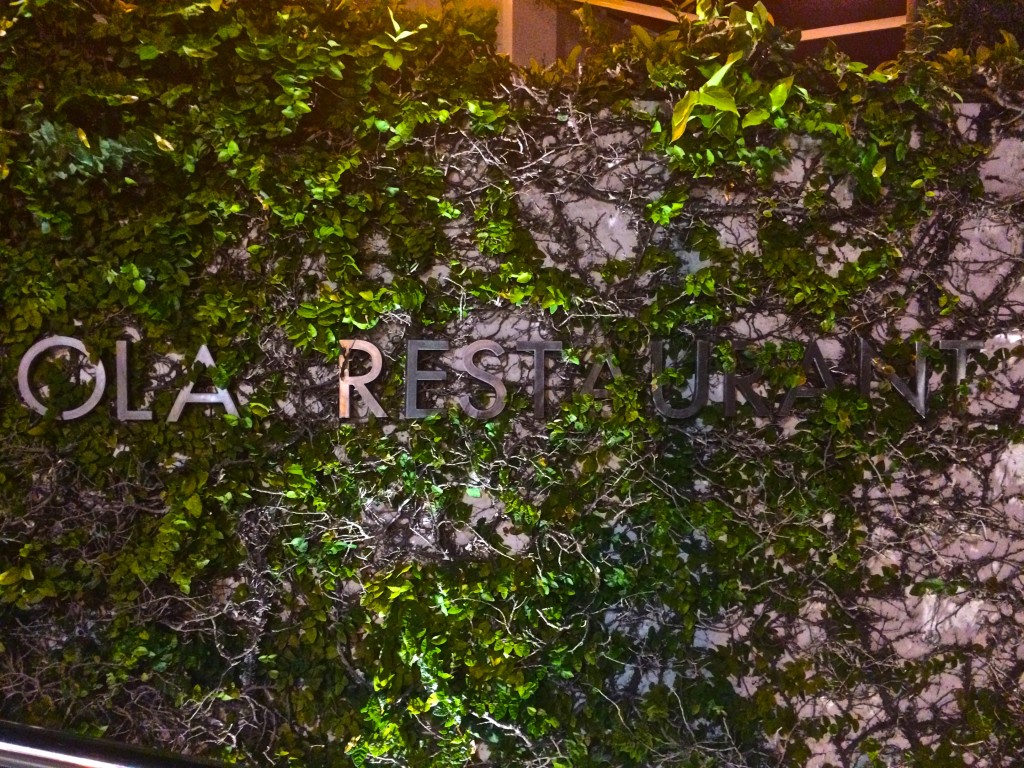 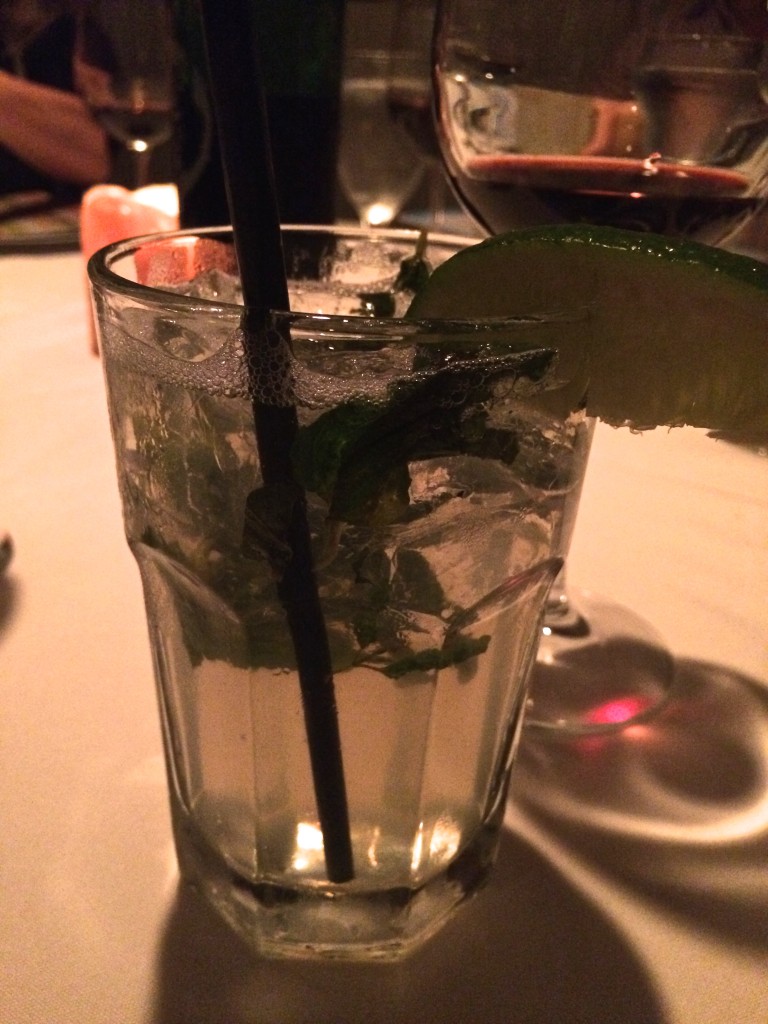 We started out with a round of their famous mojitos which were bright with mint and perfectly tart with fresh lime. Unfortunately the restaurant was really dark, so all my pictures were taken with flash and aren’t as good as I would like them, but you get the gist of everything!

Ola is world famous for their ceviches; the Fire and Ice was even featured on Food Network’s The Best Thing I’ve Ever Ate! 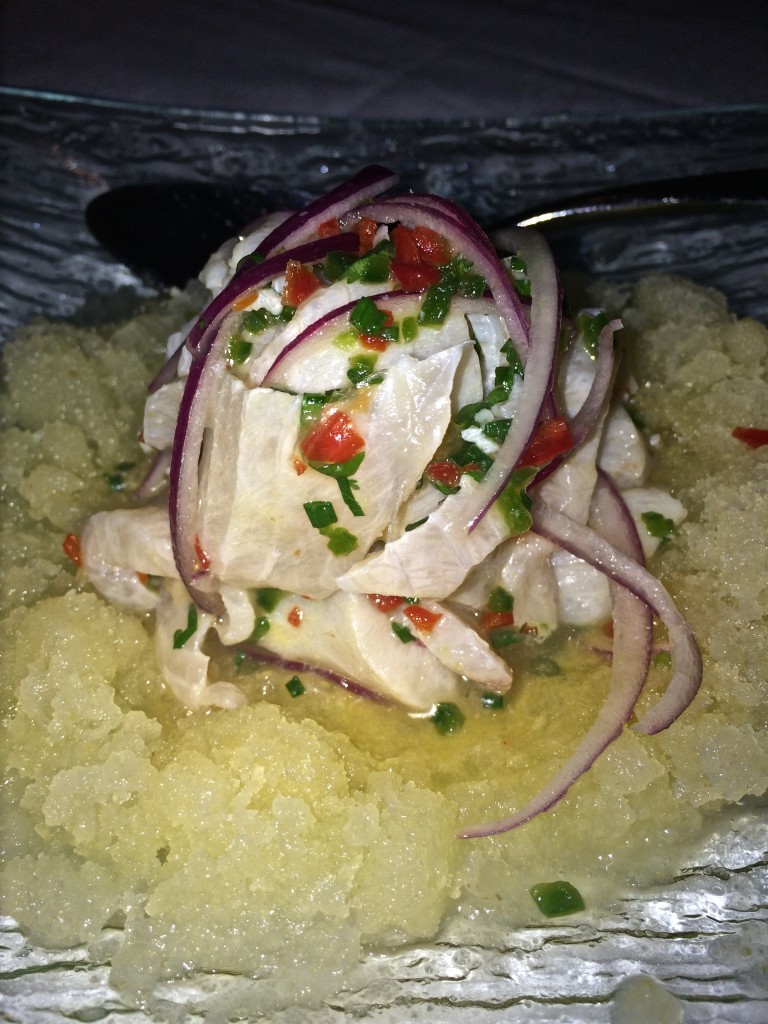 I should’ve saved the best for last, but I’m too excited to talk about the Fire and Ice, which out of the 4 we ordered was without a doubt the best. A tangle of thinly sliced Cobia marinated in sour orange, red onion, cilantro, and jalepeno sits in a bed of saia pear granita.

The fish makes your lips burn with spice but the pear ice cools everything down and sweetens the deal. Ceviche perfection! 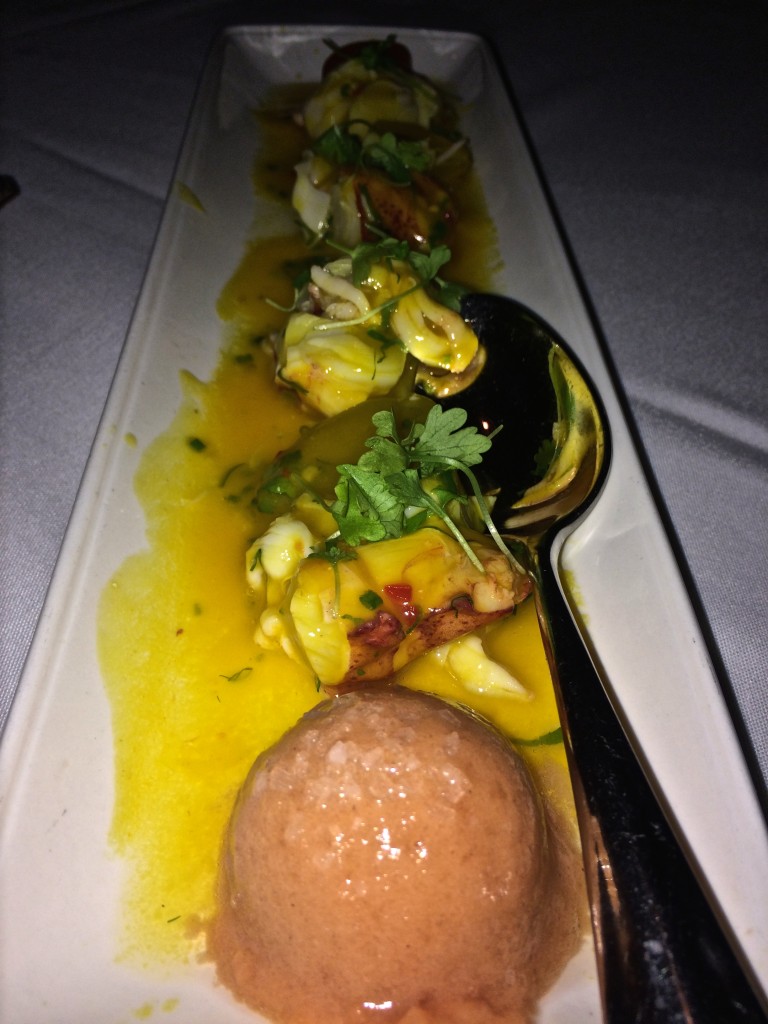 I was skeptical about the thought of raw lobster, but the texture was just a little more chewy than fish and the butteriness of the seafood really shined through. The semi-savory sorbet (say that three times fast!) added a refreshing cooling element to the dish and an additional pop of fresh tomato flavor. 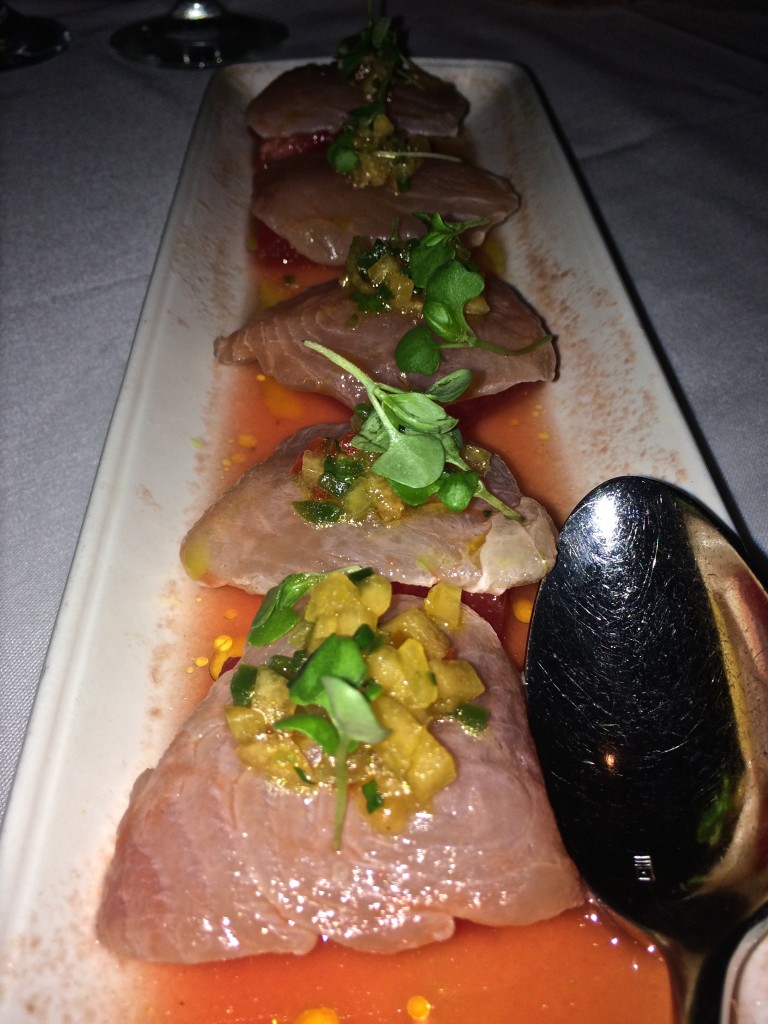 Our third pick was the wahoo ceviche overtop compressed watermelon with diced cantaloupe and cucumber sorbet. Although the garnishes were amazing, the fish was the most bland of the bunch. 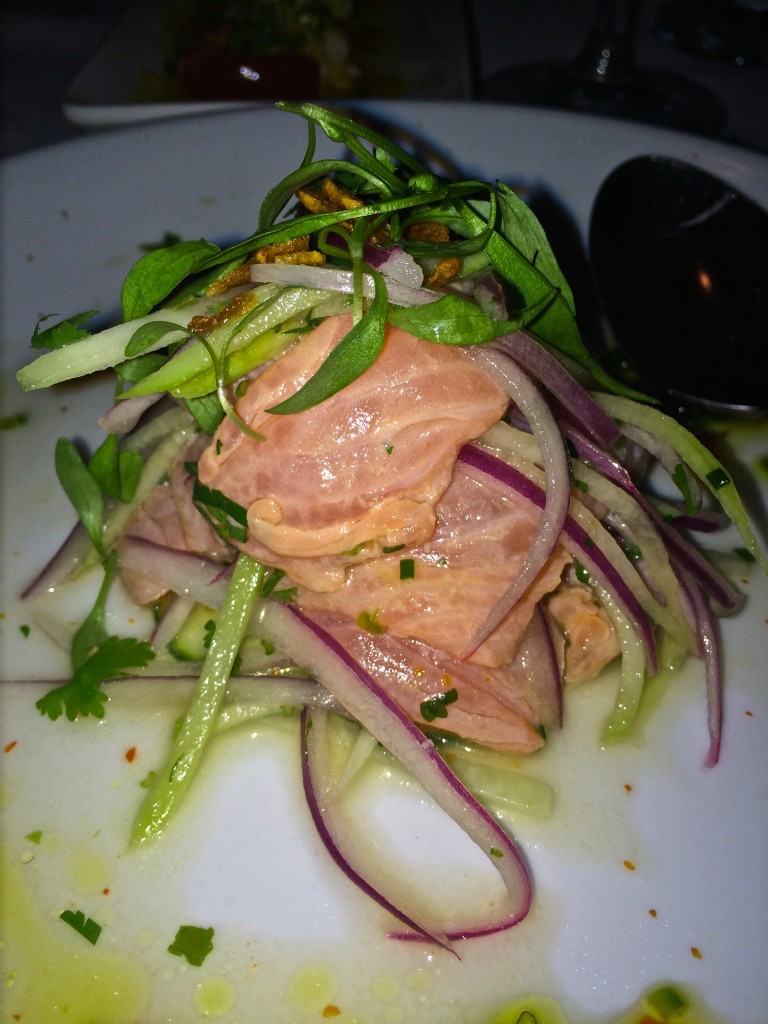 And finally the salmon ceviche, every sushi lovers dream! White soy, cucumber, crispy garlic, and citrus marinated the silky fish, and was nearly as good as the fire and ice. 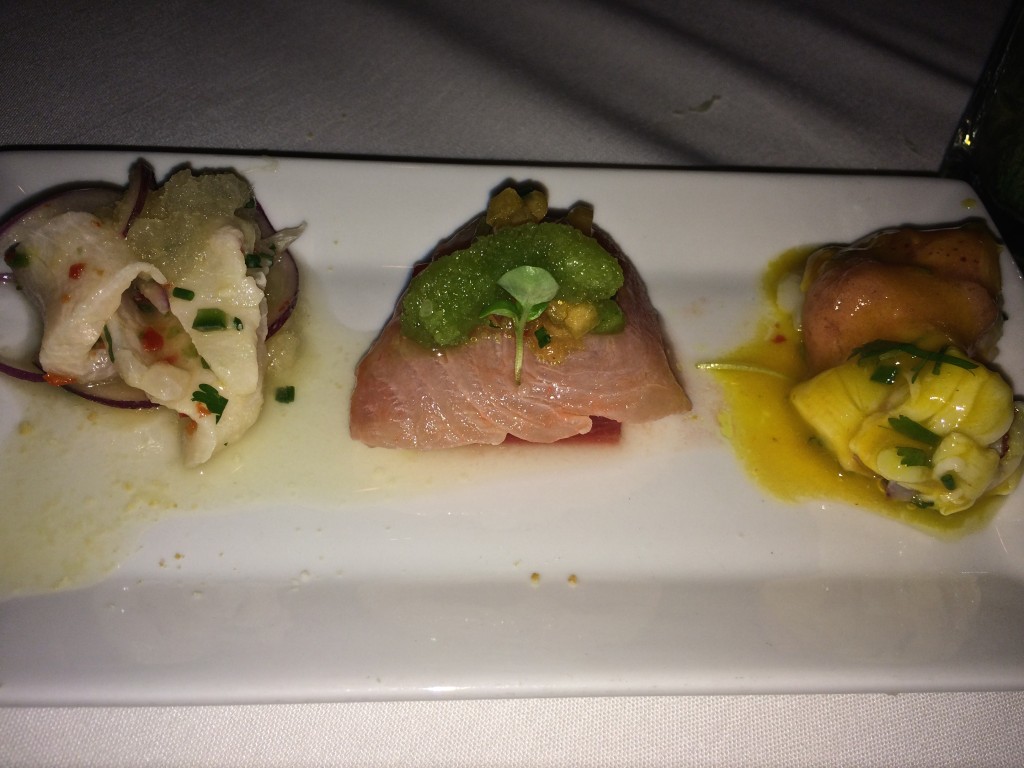 Mini smoked marlin tacos with rum-vanilla cured fish in a crispy malanga shell with pickled jalepenos. My mom claims this was the best thing she’s ever eaten and loved the slight sweetness of the creamy fish paired with the spice from the sliver of jalepeno. 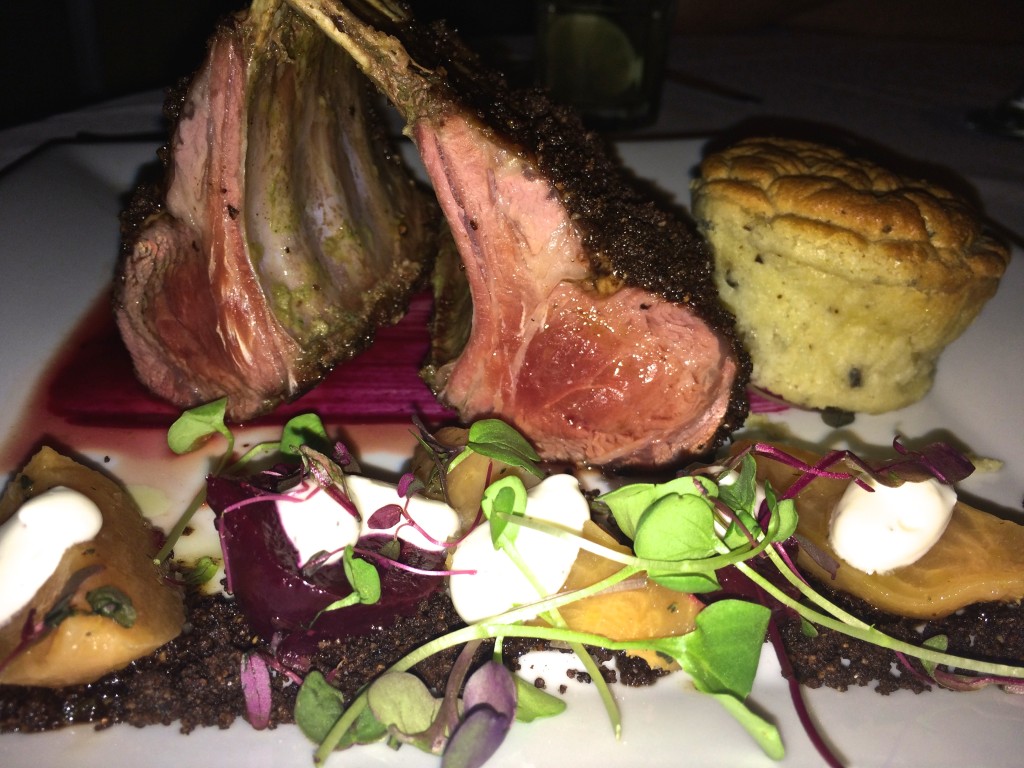 On to the entrees! Cole and Zack got the hazelnut crusted rack of lamb with roasted beet salad, goat cheese cream, lamb demi, and black truffle pudding.

This was one of the best lamb dishes I’ve ever tasted. The hazelnut crust had a creamy almost peanut butter like element that richened up the meat, and the vinegar from the beets cut that richness perfectly. Finally, the black truffle pudding was creamy and heady with the seductive aroma of truffles. One of the best composed dishes I’ve seen. 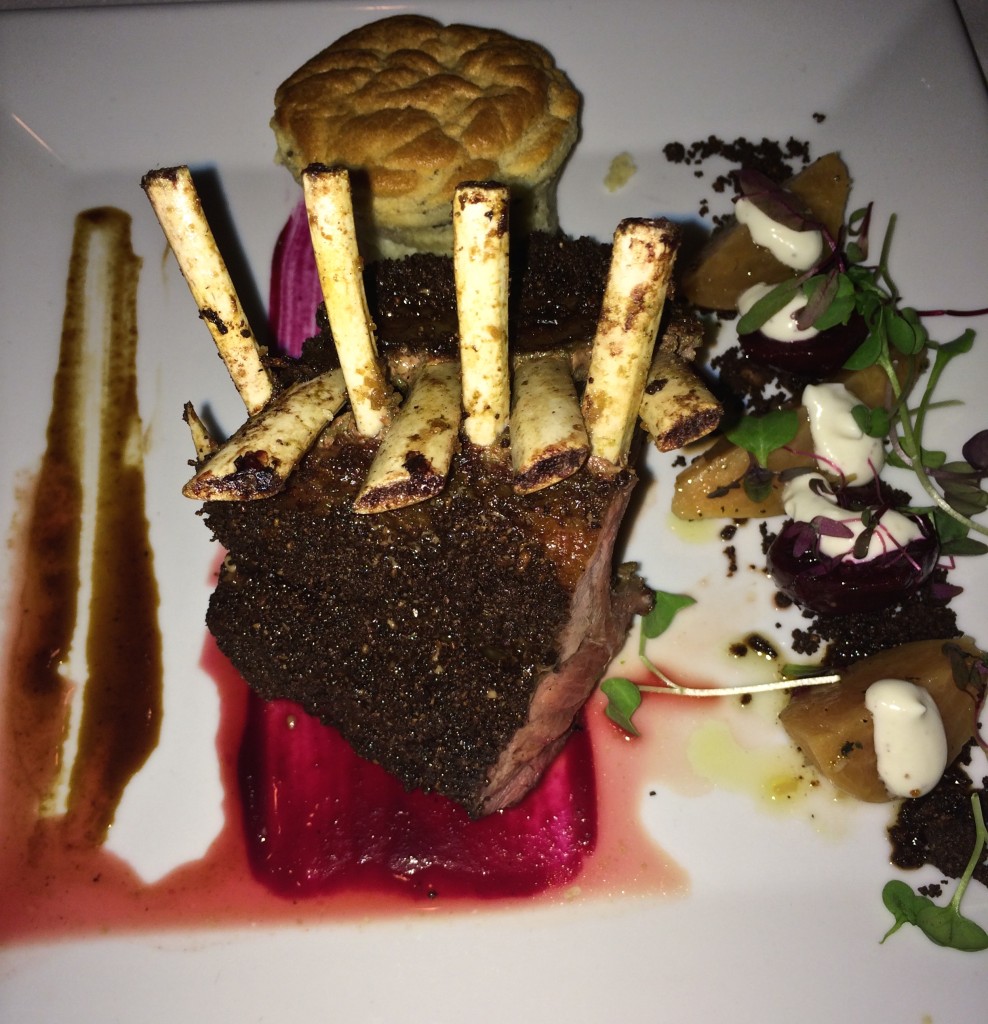 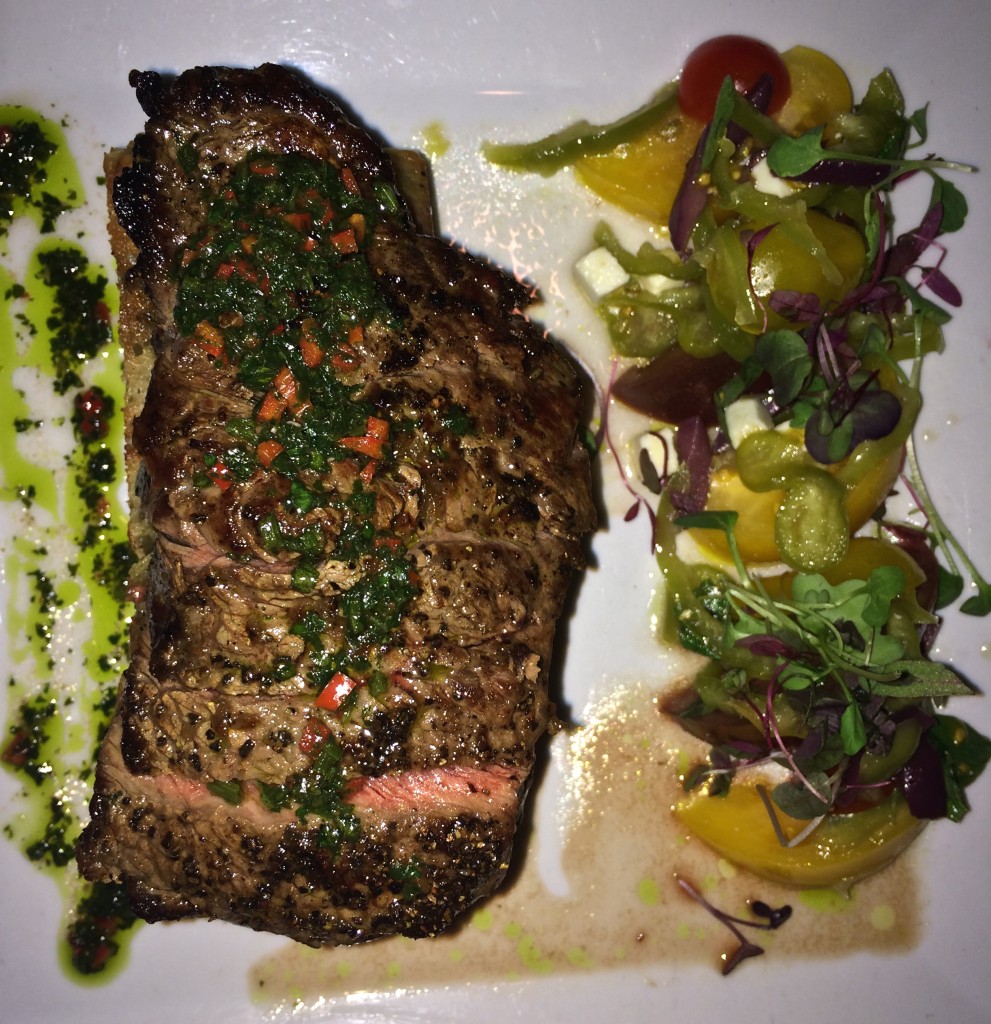 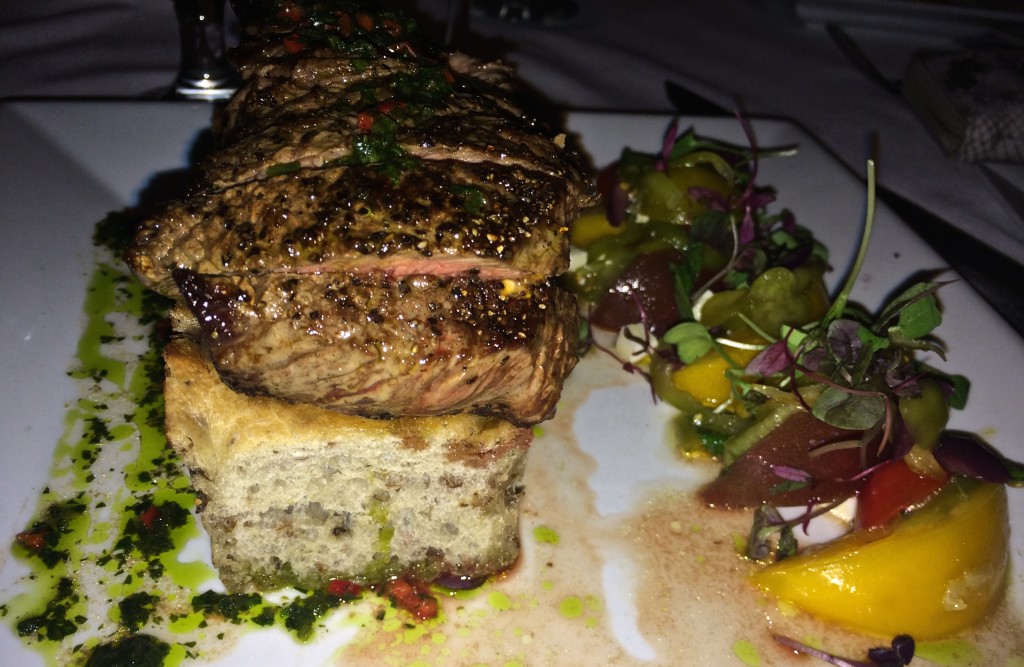 My dad got the massive NY Strip over homemade focaccia with a heirloom tomato salad and oregano chimichurri. The focaccia was drenched in olive oil just like good bread should be, and the steak was incredibly juicy. 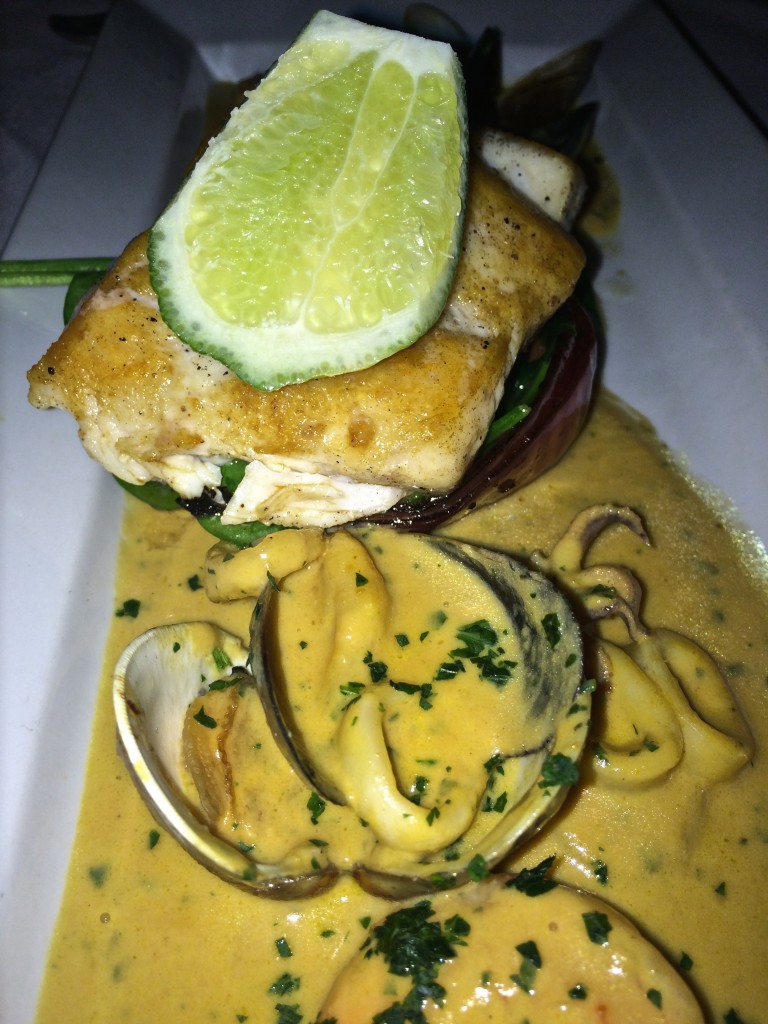 My mom and I split the sea bass draped in a jalepeno saffron cream sauce with calamari and mussels. This was my least favorite of the bunch because of the tough texture of the fish, but I could put that sauce on everything for the rest of my life.

For once we were too full to get dessert, but I think I could’ve eaten another one of those ceviches! If you’re looking for some fabulous ceviche and killer mojitos, Ola is your place!